The quality of German education is world-renowned for a reason. It's well-organized and designed to be highly accessible to all students allowing them to continue studying up to the university level regardless of a family's finances. All German states offer the same school systems and education system. German public schools - no matter if they are elementary schools, secondary schools, or vocational schools - generally do not require any tuition fees.

This article will give you an overview of the German standards of education, the organization of the school system, the subjects taught, grading systems, and more.

General information about how the school system is organized in Germany

Compulsory studies in Germany is based on the rules and regulations of the Grundgesetz (the German basic or fundamental national law). The federal government, with its departments of Education, Cultural Affairs, and Science has come together to create comprehensive education guidelines regarding basic general studies, administrative regulations for school attendance, management of higher education, and foundations for public and private schools.

German educational standards at local schools and also at higher education institutions are relatively high. In fact, precisely because the German school system is so well structured and rigorous, it produces some of the most accomplished students in the world. In a 2015 OECD/PISA study, Germany ranked 16th in mathematics as well as in science, and students attending ranked 11th in reading.

Students are thoroughly tested and evaluated at each stage of schooling. If a student fails to achieve the required minimum grades in two or more classes - for example, in a foreign language, and in religious studies- they have to repeat the whole year to ensure that they are always meeting the requirements to move up.

Only 18% of students at most German schools have to repeat the year once, and more than 50% of students report attending post-secondary and higher studies in Germany.

How does the German education system work?

Compulsory education in Germany dictates that all students from the age of six to 15 years old need to attend school consistently. However, students usually stay in school until 18 years of age and then start a university education at a German university or a continuing vocational education at a full-time vocational school or technical school.

While parents can choose to put their kids in a private school or even an international school for preschool education, primary education, or secondary education, the curriculum in public schools and the secondary education in Germany is sufficient enough to allow their students to aim confidently for university-level education and obtain a university entrance qualification after the final examination at the Gymnasium (high school).

Kindergarten and Preschool in Germany

Did you know that nursery or preschool is optional in all German states? Up until six years old (that's the school age for German primary school), children may legally stay at home with parent(s) or spend the days with a privately-run child-minding service provider (or "Tagesmutter") instead of going to an official children's daycare center or "Kita" / "Kindergarten" for early childhood education. 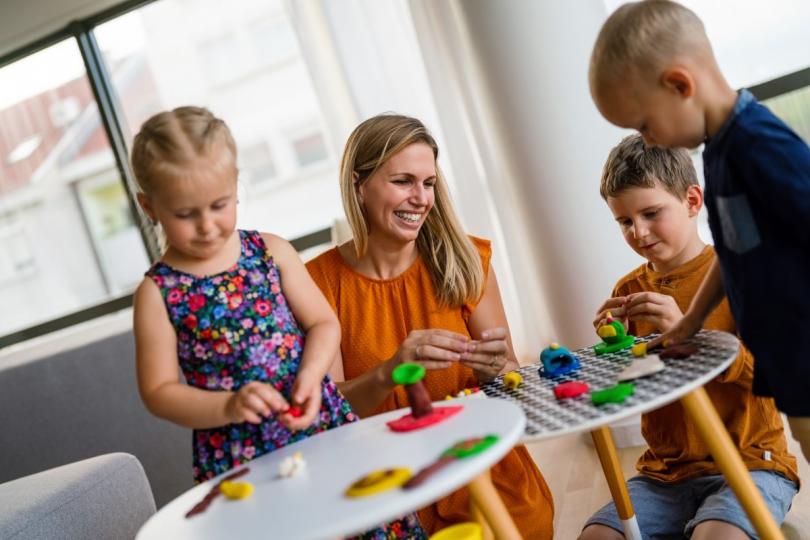 After this, children will then first attend primary school or Grundschule, and later one of the available types of secondary school/high-school studies.

How many days a week do German students go to school?

The German school week runs from Monday to Friday. Students at elementary school start pretty early, from 8 a.m., and stay on until 1 or 2 p.m. For older kids in lower secondary education, these hours may be extended until about 4 p.m. German students in upper secondary education might even stay until 5 p.m. during their last school year.

Primary school or elementary school in Germany is known as Grundschule. The very first term in German primary education starts around the beginning of September. From ages six to ten, children go through four years of school at a primary level. However, some primary schools and private institutions run for six years; that means your 5th-grade age would be 11 and a 6th-year student would be 12 years old.

How old are you in 4th grade?

This depends on when you entered primary school. If a child hasn't turned six by the time school starts, they are considered a kann Kind or a 'can child' - as in they can attend school. They're not a muss Kind, which is a 'must child'. These children must attend school.

What does the kann Kind's eligibility depend on?

They may be required to pass a test known as the Einschulungsuntersuchung - and even if this is passed, administrators may not offer entering secondary school as an option if the child is not also socially or physically ready.

School holidays in Germany include common breaks like Easter, winter holidays, and summer holidays. The exact dates differ for each kind of school, however.

Berlin public schools, for example, begin the summer break around June 20th and end around August 2nd. Meanwhile, students in Bavaria break around July 29th and resume around September 9th. The exact dates change from year to year.

Anyone attending vocational programs in Germany is usually not only trained in their workplace but must also attend a vocational school. As a rule, a secondary school leaving certificate is expected at the vocational school. This can usually be obtained at comprehensive schools, the Realschule or specialist schools. Studies in German comprehensive schools does not focus so much on learning a second foreign language, but rather on computer skills or physical education, for example. These subjects are more important for vocational programs. There are basically eight specializations in vocational education: Agriculture, Design, Health, Education and Social Services, Information Technology/Computer Science, Technology/Natural Sciences, Nutrition and Supply, and Business and Administration. 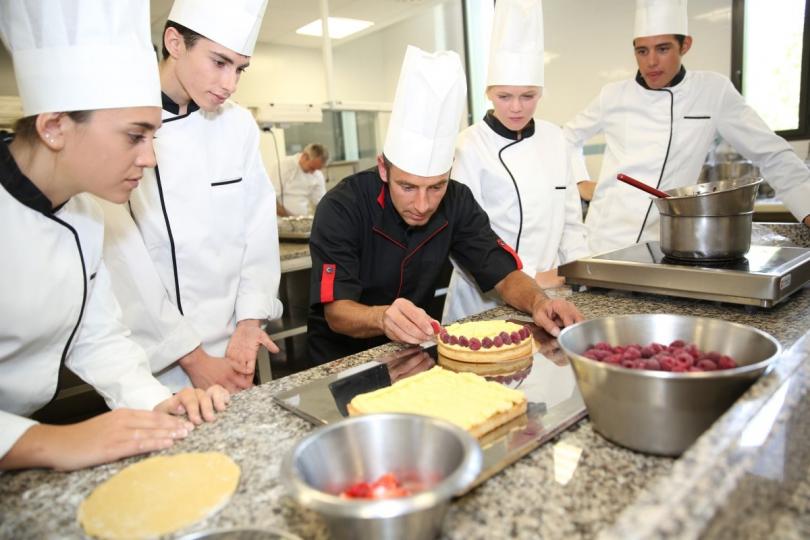 Is education in Germany for free?

Administrators and educational ministers in Germany believe that the costs for education should not be a prohibiting factor in a child's education. That's why compulsory studies in Germany is completely free for all students. School attendance is not subject to any tuition fees and also higher education at a German university is free of charge, provided it is not at private institutions.

Is there good education in Germany?

Anyone in Germany who earns a higher studies entrance qualification or completes training at vocational schools has good opportunities on the job market. In 2018, around 88 out of every 100 people between the ages of 25 and 64 in Germany had at least one of these qualifications.

No. If you're attending a public school, whether it's a primary school or a secondary school, you do not need to wear a school uniform. Only some private schools in Germany may require a uniform.

Does Germany have homework?

Homework in Germany is considered very important, and the school day is structured in such a way that students have plenty of time to complete it and gain extra help or support where necessary.

Even in primary school, students spend at least half an hour on homework every day (known as Hausaufgaben). Education in Germany is designed to provide students with 20 to 30 hours of lessons per week.

How long is the average school day in Germany?

Each class runs for about 45 to 50 minutes. There are breaks for food and socializing, but there's usually no need for a cafeteria because school ends around lunchtime. Students at secondary schools with longer classes usually bring their own food, and many private schools offer complimentary meals.

The German education system might take some time getting used to for international students: If you're moving from overseas and are used to a different structure of full-day schooling at secondary school, don't fret. Increasingly, German schools are offering a full day of education that sets aside time for homework, extracurriculars (like German language classes for foreign students), and lunch hours.

Learn more about the general subjects in Germany

Subjects taught in German schools differ at each level. For example, students at the Realschule level will study a range of subjects (computer science, mathematics, a foreign language, etc.) while also achieving an established academic level.

The difference is that this kind of school's culminating diploma will be known as the Realschulabschluss and this will qualify to graduate students to take vocational qualifications, training courses, or apprenticeships in, for example, commercial trade or a medical profession.

However, these students still have the opportunity to transfer to the Gymnasium for their final two years if they're set on attending university. Education in Germany is designed in such a way that it depends on which secondary schools one attends in order to receive higher studies later on. Nevertheless, most German schools allow students to transfer within the system and attend a school whose final examination will give them a university entrance qualification. This means that higher study institutions in Germany are open to all German students within the German education system.

What subjects are taught in German schools?

This depends on which secondary school the student has chosen and where in the country they're located. In general, education at the Gymnasium level (required for those planning to attend tertiary education, i.e. university) covers a broad range of subjects.

Students are opting for 32-40 hours of lessons a week, plus additional homework. They'll be studying a variety of subjects, usually including a second foreign language from a pick of English, French, Spanish, Latin, and more. There are also sports, music, drama and art lessons. "Honors" courses in Germany are known as Leistungskurse. Students at other secondary schools have the same subjects, but usually learn only one foreign language and school attendance is shorter. While students attend a Gymnasium for 8 to 9 years, they attend a Realschule or another comprehensive school for two years less. By the way, school attendance is compulsory and students who skip classes receive a reprimand.

Is Homeschooling illegal in Germany?

Yes, homeschooling in Germany is considered illegal because students must attend school from 6 to 15 years of age. The German education system requires that all children attend a school, whether it is a primary school, a secondary school, an international school, or a private school.

What is the Grading System in German Schools?

The grading system in Germany runs on a scale from 1 to 6. The highest is 1 or sehr gut ("very good"). This is an outstanding achievement. An average score is 2,6 to 3,5, or befriedigend, which is 'satisfactory'. 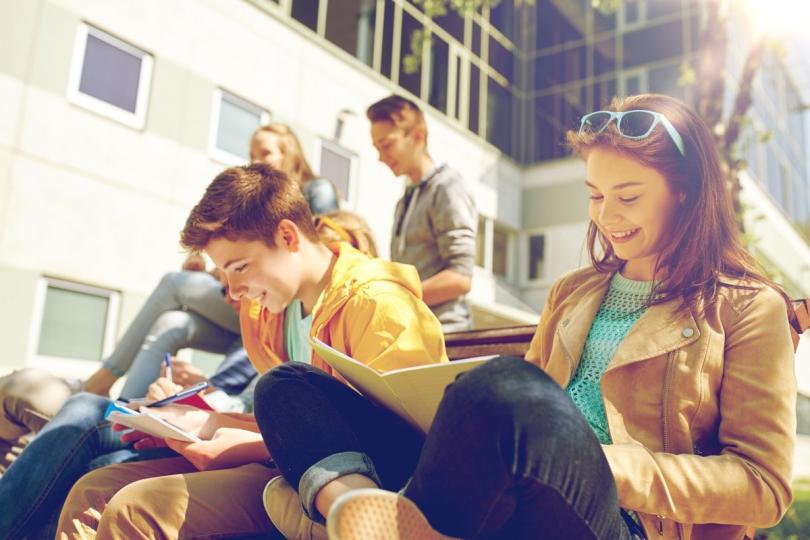 International schools in Germany are a big draw for foreign families that want their kids to be schooled in another language - usually English. This can help students feel more comfortable as they transition into life in a new country.

These are full-day schools with students from different nationalities and countries represented. They offer a full range of educational subjects and extracurricular activities. They're perfect for students who are already halfway through their curriculum in their own countries.

Search by city, major, or field of study, and find your dream study program in Germany.