Read on to find out more about this day's history, its relevance in Germany, and more information on gender equality in the country. You'll also be able to check a list of international women communities in Germany.

International Women's Day is a date to demand recognition and rights for women and their work. It is also a day to celebrate the progress made towards gender parity. While there is still much work to be done, it is essential to reflect on how far women have come and the need to keep fighting for gender equality.

On Frauentag, women are celebrated for their achievements and contributions to society. Some businesses give women the day off work, and there are often events and celebrations held to mark the occasion and highlight the contributions of women to society.

International Women's Day is especially significant in Germany as it was an initiative started by Clara Zetkin. During the GDR period (East Germany), the government even awarded the Clara Zetkin Medal to organizations and women supporting feminist and socialist causes.

Who was Clara Zetkin, founder of International Women's Day?

Clara Zetkin was born in 1857 in the German state of Saxony. Aged just 19, she became a teacher and joined the Social Democratic Party (SPD). In 1910, at an international socialist congress, she proposed the idea of an International Women's Day – and a year later, on March 19, 1911, the first-ever such event was held. Zetkin's work had a considerable impact on International Women's Day. She helped make it a global event, and her speeches inspired women worldwide to fight for their rights.

Zetkin was not only relevant for the creation of International Women's Day. She was also a leader in the SPD and helped secure women the right to vote in Germany. She also fought for equal pay and better working conditions for women. After World War I, from 1920 until 1933, she became a member of the Reichstag (the German parliament) and helped write the Weimar Constitution, which guaranteed equality for women. She also served as the head of the German Communist Party from 1930 to 1933. Thanks to her tireless work, Zetkin is considered one of the most influential figures in German history. 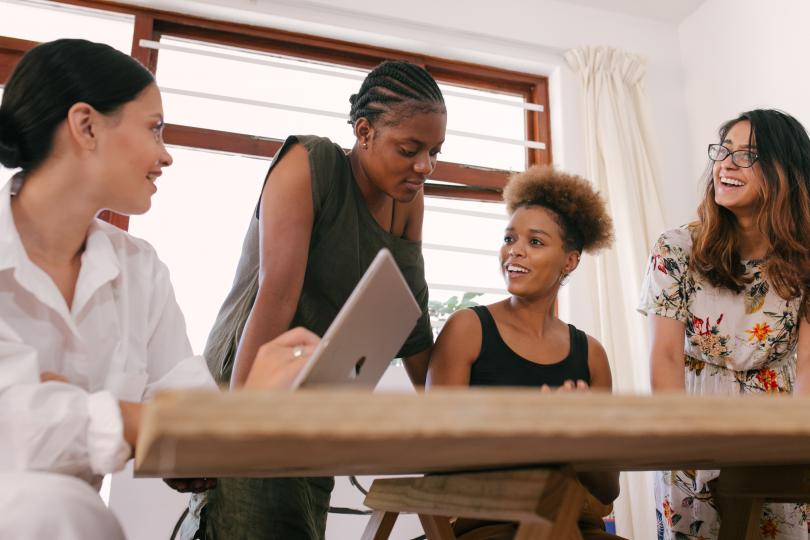 Women and gender equality in Germany

Achieving gender equality is a global issue pointed out by the United Nations' Sustainable Development Goals (SDGs). According to the agency, women have a critical role in all of the SDGs, with many targets specifically recognizing women's equality and empowerment.

A UN goal specific to women's fight is goal 5, dedicated to achieving equality and empowering women. Unfortunately, according to the UN, women are not recognized as equal to men in 52 countries. Moreover, severe gender disparities are seen in the labor market, with women earning 20% less than men globally. And there is only 25% of representation by females in national parliaments.

In Germany, women have made great strides towards gender equality since the early 1900s. The German Constitution of 1919, also known as the Weimar Constitution, granted equal rights to men and women. Since then, even though history has presented a few hurdles, the country has continued to promote gender equality throughout its laws and policies. Currently, Germany is one of the leaders in the global effort to promote gender equality. And for over 15 years, Germany was one of the few countries globally with a female head of state.

Germany is working to close the gender pay gap, and it has introduced policies to encourage more women to enter into leadership roles. One of these policies is The Act to Promote Transparency in Wage Structures among Women and Men (Gesetz zur Förderung der Transparenz von Entgeltstrukturen), also known as Transparency in Wage Structures Act. This act requires companies with more than 200 employees to disclose wage data for men and women. This action helps to ensure that women are being paid equally for their work, and it also helps to identify discrimination in the workplace.

Germany ranks 10th on the Gender Equality Index compared to other EU countries. However, the country is 0.6 points above the EU's average score, and Germany's score has increased by 6 points since 2010. The gender pay gap has narrowed significantly in recent years in the country. Nevertheless, in 2020, women in Germany still earned an average of over 18% less than men per worked hour, according to a 2022 report by the Economic and Social Science Institute (WSI).

There has been improvement regarding equality in Germany, and women caught up with men on education, employment, income, and a few other areas, such as educational training. However, the pandemic imposed a setback on other fields, such as the pay gap mentioned earlier. The reason is that women more often take part-time positions, possibly to balance their work and family life. Another factor is that women tend to be the primary caregiver within a family.

Germany has been actively working towards gender equality and has developed several other initiatives and policies to ensure equal pay to women and protect them from violence. You can check an overview of initiatives at the Federal Ministry for Family Affairs, Senior Citizens, Women, and Youth (BMFSFJ) website.

Some professional fields were labeled "men's jobs" for several years." Due to a long fight for rights, independence, access to education, and professional development, the world has plenty of great female specialists in different spheres. However, exceeding your career as a woman may still be challenging. Read on to find a few communities in Germany and globally that can support your professional and personal life in the country:

Startups and Leadership for Women:

Is International Women's Day a holiday in Germany?

International Women's Day, celebrated on March 8, is a holiday in Germany. However, if you are expecting to take the day off, you should live in Berlin, as the date is only recognized as a public holiday in the German capital.

How to Get a Loan in Germany [Requirements and Tips]

The Best Credit Cards in Germany

10 Most Useful Apps for Students in Germany [2022 Edition]